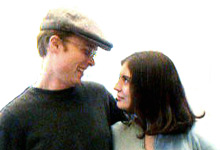 The journey began at six in the morning in Chico the day of our flight out of San Francisco to London on the 27th of December, 2003. We had returned to Chico the day before from visiting our family in Siskiyou County for Christmas. We spent most of the night packing our bags and slept in a state of disbelief.

We left our apartment and drove to Gary’s house in Orland where he and my mother graciously fed us, gave us some traveling snacks and juices, and packed us and our bags into the car. The air was one of excitement, and we all shared in its intoxicating effects.

Being the maniacally early travelers that we are, Tina and I had decided that we should leave in the early hours of the morning to allow for traffic jams, flat tires, flash-floods, hurricanes, earthquakes, and any other unexpected travel delays en-route to San Francisco International Airport that could threaten our preciously fast-approaching honeymoon get-away. The plane wasn’t scheduled to leave until 4:45 in the afternoon. We arrived promptly at 11 AM.

As it turned out, the Virgin Atlantic check-in counter hadn’t even opened yet. We couldn’t have been happier. The entire day had been given to this flight, so we were all relieved to be where we needed to be without the fear and stress of important timelines to be met in distant locales.

After checking in, eating a surprisingly tasty pizza in the Airport food court with my mom and Gary, and shooting a great mini-video of Tina and I, we quickly passed through security and went to wait in the same spot we had nearly three years before. That was around 2 PM. There was nobody else waiting at the terminal.

After about an hour or so, a few other people trickled into the terminal and spread themselves thin across the industrial but comfortable fixed seating. I had plugged my iPod into a nearby outlet and was diligently ensuring a fully charged battery while simultaneously enjoying some Brit Rock. The location of the outlet in relation to where I was sitting, however, resulted in a long, exposed, stretched white power cord and a precariously propped-up iPod. The remaining distance between the iPod and my ears was measured by the maximum length of the corded remote and earphones. In short, it was a setup begging to trip someone and destroy my precious new toy.

As fate would have it, a small boy of around two or three years found his way over to where we were sitting and, in a burst of spontaneous energy of which I’m convinced only small children are capable, ran full force toward my four hundred dollar trip-wire and tried to jump over it en-route to the floor-to-ceiling window where the giant 747 jets could be seen parked. He failed to clear the hurdle.

Fortunately, the setup was as forgiving as it was precarious, and the earphones ripped from my ears quickly and painlessly, providing the necessary slack to keep the boy (mostly) on his feet and my iPod from slamming helplessly into the wall. I jolted awake (I had been dozing off) and fearfully eyed my Apple-white suite of electronics, assessing the situation and fearing the worst. The iPod and all associated cords were undamaged. The boy momentarily mirrored my concern, looked up at me wide-eyed, and, observing that I had no words of scorn in store, happily continued his jaunt to the window and plastered his face against the glass.

He quickly lost interest, however, and came walking back as I was in the middle of changing my setup to avoid repeating this near-destructive incident. He stopped about a foot short of the still-outstretched power cord (now on the ground and disconnected from the iPod), and, focusing on it carefully, swung both arms back and hopped over it with both feet together. Having cleared the obstacle completely, he looked at the cord to see that it was in the same place, and then gave me a look of complete personal satisfaction and ran back to his mother. I smiled and shook my head, gathered the remaining components and put them in my backpack. I decided novel reading would be safer.

The longer we sat there the more we fantasized that the plane would be empty and that the emergency aisle seats we had requested would be ours for the taking, or that a lonely flight attendant, having no one to tend to in first class, would come back and invite us into the posh section of the plane where seats converted into fully flat beds, massages were available at any time, thousand-dollar bottles of wine were poured into diamond-encrusted wine glasses, and wads of cash were dispensed in the lavatories in place of toilet paper. Tina and I, humbled at the invitation, would feign our desire to remain in the seats we had paid for, not wanting to be granted an unfair advantage over the ten other people on the flight snoring like cannonfire and barking for more peanuts when awake. Fighting to persuade us, the flight attendant would implore us to _please_ come to first class, and reluctantly, we would agree. _Just let us grab our things and we’ll be right up,_ we would say. _Do hurry, it is so very empty up there,_ she would reply.

Unfortunately, as the hours before our flight’s scheduled departure waned, a considerable number of people began showing up and crowding the terminal. _So much for that massage_. Despite the crowd, we were lucky enough to have one of our fantasies actualized when we were called down before boarding and granted our request to sit in the emergency aisle seats (where there is no seat directly in front of you, and you can stand up at any time with no hassle whatsoever).

There were additional security checks before boarding the plane that we did not have to undergo. It appeared as though they were checking people at random and we were waved through without incident. We boarded the plane, found our seats, and settled in for our ten and a half hour ride.