A good number of my tales of personal klutzhood are associated with my years spent in pursuit of athleticism. I was a player of soccer, volleyball, basketball, and football; T-ball, baseball, softball, and dodgeball. And although I do not remember specific occasions in all of these sports, I’m convinced that I injured myself at least once while playing each. If there was to be a single binding talent to describe my many years of sporting, it was that of always finding a way to injure myself. What varies, of course, is the extent of those injuries.

As a fourteen year old freshman in high school I managed to angle a baseball off of the end of my bat into the space between my eyes defining the upper ridge of my nose. Amazingly enough, despite the rather dramatic trauma to my skull, I remember the event quite well.

It was at practice on Diggle Field in Montague, California. I was at bat and the pitcher was experimenting a bit with his creative pitches. The first pitch was a fastball and, true to form, I missed it completely. I always had a nasty habit of blinking as the ball was just about to make contact with the bat. The next pitch, a curveball, began its flight with vectors directed at my skull, and refined its true path inches and feet per second. First I leaned back, confident that the ball was going to hit me in the head if I did not move it. As is the case with a good curveball, however, I soon realized it wasn’t going to hit me at all, but rather that it would probably end up in the strike zone. But I hesitated. In that fragmentary breadth of a moment, I decided to let it go, changed my mind, changed it again and then swung.

From the hesitant, partially swung end of the bat came the ball to my face. 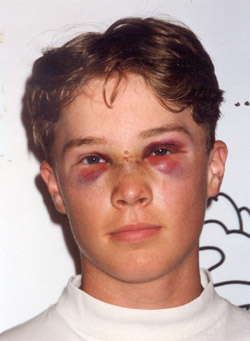 My glasses broke precisely in half and I crumpled in what I remember to be a graceful, spiraling decent outward — ending up facing in the opposite direction, folded in on myself. Of course, I bled. A veritable puddle grew out from my nose by home plate as I lay still, my mind repeating soundclips and visuals far more often than even my disoriented consciousness deemed normal. A disconnected part of me found it odd, this twitching, skipping soundtrack and the gathering warmth around my face.

I was helped to the dugout where I was laid down upon the wood bench and my face was promptly covered with a pink diaper. I listened to what I could distinguish as individual, nervous fragments from the coaches and parents.

“Do you think he needs an ambulance?”

“Does anybody know his parent’s phone number?”

My other senses returned quickly enough to realize that it seemed an axe had been driven between my eyes. I couldn’t see it, mind you, nor feel it with my hands, but I was sure it was there. Every so often it would shift and I would wince, physically and audibly, and the frightened coaches, teammates and parents around me would regard me more nervously, more tentatively, building their collective mindset that I needed medical attention, and fast.

My dad arrived to pick me up from practice just in time to see the ambulance hauling me away. He followed the ambulance to the emergency room, where the doctor promptly prescribed Codeine and diagnosed me with a nicely broken nose. “Nicely” because it had broken straight-on, and not to one side or the other, which meant I was probably going to be just fine and not require any “reconstruction” (read: a specialist who is paid to break your nose again for you in the opposite direction to straighten it back out).

My dad, who has broken his nose twice in his lifetime, patted me on the back and congratulated me on my quickly-developing prizefighter face; something along the lines of a George-Foreman-post-tenth-round comparison. I laughed, which sent searing bolts of pain through my head, and settled on turning up the extreme corners of my mouth and vaguely nodding instead.
The photograph you see is my face a few days after. The width (and tenderness) of the bridge of my nose prevented me from wearing my glasses for about ten days, and so I was mostly blind for all of that time. My left eye was swollen shut for the first few days. A curious, filmy-clear blood came out of my nose for at least a week afterward. To this day I have a slight ridge in the cartilage where my nose broke (roughly where the bandage is in the photo).

The trip from Montague into Yreka in the ambulance (a grand total of about 7 miles) cost us over $500. I would be curious to see the total of what all of my various trips to the hospital have cost over the years. Many thousands, I expect; many, many thousands.

All well-spent, of course.